The LM78XX series of three-terminal positive regulators is available in the TO-220 package and with several fixed output voltages, making them useful in a wide range of applications. Each type employs internal current limiting, thermal shut-down, and safe operating area protection.

7805 is popular for Embedded Systems and 7905 is sometimes used for the Dual Supply needs in such Microcontroller cards with Mixed Design sub-sections like A/D or Opamps.

7812 and 7912 are very popular in powering Traditional Opamp or communications circuits with a stable and reliable Dual Supply.

Power Supplies Section – Here you will find examples of 7824 and 7924 Power supplies. 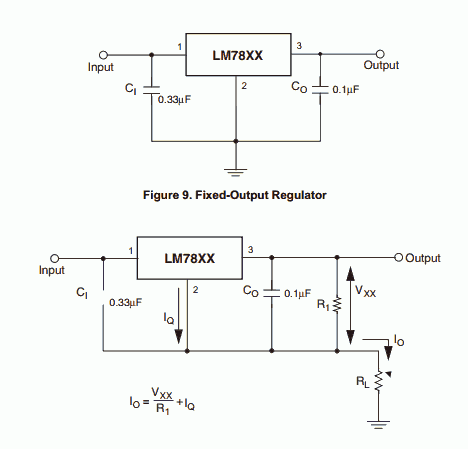 In Instrumentation and Industrial Circuits where Size is not a problem and the current or power usage is less. A Mains transformer, bridge regulators, capacitors and these regulators are a time tested low noise and robust system.

SMPS does have EMI-RFI problems, hence use when small sizes are needed and high currents are required. In battery powered devices switching supplies are inevitable as they are power efficient.

With adequate heatsinking they can deliver output currents in excess of 1.0 A. Although designed primarily as a fixed voltage regulator, these devices can be used with external components to obtain adjustable voltages and current.

MC7900 – Voltage Regulators 1A – On Semiconductor

The MC7900 series of fixed output negative voltage regulators are intended as complements to the popular MC7800 series devices. These negative regulators are available in the same seven voltage options as the MC7800 devices.

Common ground is required between the input and the output voltages. The input  voltage must remain typically 2.0 V above more negative even during the high point of the input ripple voltage.

The Adjustable voltage regulator above can vary the voltage at output from say 7V to 15V for an input of about 18V DC, The output is regulated but can be trimmed to choice. The input can be from a Transformer-Bridge Rectifier-Capacitor Filter based Power Source. – delabs Notes

The Plastic Packages of devices are a Material Similar to Epoxy. The Device cannot get Heated beyond a certain limit. Even with Heatsinks, current limit is a good way of protection. In some Applications the Power Supply may be shorted as the load fails or insulation breaks down in a user product. The above circuit protects the supply stage. – delab Notes

The above circuit is a current regulator, it limits current beyond a certain limit. It does not mean it can pump current into a high impedance load, as this is limited by the supply voltage and ohms law. When a low impedance load like a Bulb that draws 100mA at 5V is used as a load in above circuit you could limit the current from near zero to 100mA. A nice circuit for DC Motor Speed Control or LED Lighting. – delabs Noites

All above circuits can be adapted to the negative 7900 regulators circuits. You have to remember PNP transistors are not used in the final output stages. NPN can take the heat and current loads. So it makes your Negative Regulator Boosters a bit complex.  The below two circuits have the 7900 regulators playing their negative roles. – delabs Notes

When a boost transistor is used, short circuit currents are equal to the sum of the series pass and regulator limits, which are measured at 3.2 A and 1.8 A respectively in this case. Series pass limiting is approximately equal to 0.6 V/RSC. Operation beyond this point to the peak current capability of the MC7905C is possible if the regulator is mounted on a heatsink; otherwise thermal shutdown will occur when the additional load current is picked up by the regulator. –  datasheet

The MC7815 and MC7915 positive and negative regulators may be connected as shown to obtain a dual power supply for operational amplifiers. A clamp diode should be used at the output of the MC7815 to prevent potential latch?up problems whenever the output of the positive regulator (MC7815) is drawn below ground with an output current greater than 200 mA. – datasheet