Digital Timers, Counters and Clocks has some of my designs using chips like this.

This circuit provides multiplexed 7 segment LED display outputs, with common anode or common cathode configurations available. Digit and segment drivers are provided to directly drive displays of up to 0.8 inch character height (common anode) at a 25% duty cycle. The frequency of the onboard multiplex oscillator may be controlled with a single capacitor, or the oscillator may be allowed to free run. Leading zeros can be blanked. The data appearing at the 7 segment and BCD outputs is latched; the content of the counter is transferred into the latches under external control by means of the Store pin. 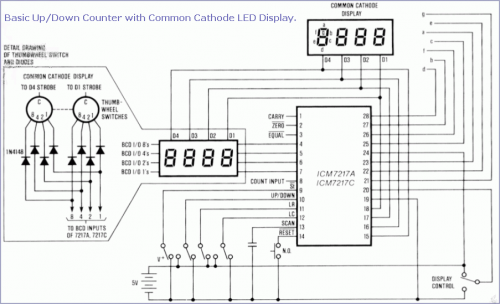 This is another Intersil Masterpiece in days when using uP was complex and uC was not available.A 8085 could be used but with many supporting chips and it consumed power. This was a CMOS innovation low on power and just one ASIC had the fexibility for many digital operations.A ThumbWheel and Display Interface completed a Gadget.

About delabs 314 Articles
delabs is a web-service for product design and development.