Capacitors are as simple as two plates of metal separated by a insulator called dielectric. When you make large values of capacitors, just two films or plates will not do, so long strips of metalized films used to get bigger values. Electrolytic capacitors use an electro chemical phenomena to form a very thin dielectric in microns, this enables large values in small size.

Capacitors ares like reservoirs of charge. In the Water Analogy they are like your Overhead Tank or Sump. It can be like a Lake or Pond, when water is the charge.

Ceramic capacitors are the most economic in the lower values like pf and nf, Electrolytic Capacitors which have polarities that should strictly be observed, are used above 1uf. Plastic caps have temperature and environment stability and are more in use in Instrumentation and Industrial Electronics in place of ceramic, mica or paper caps. Mica and Paper caps have become rare today.

Ultracaps and supercaps are the new innovation for the years 2000+. They have values in farads but quite small in size. Electrolytic caps become too big in size beyond 10,000 uF, hence supercaps have a future.Tantalum electrolytic caps are used in Instrumentation and computers, a bit expensive but much smaller. 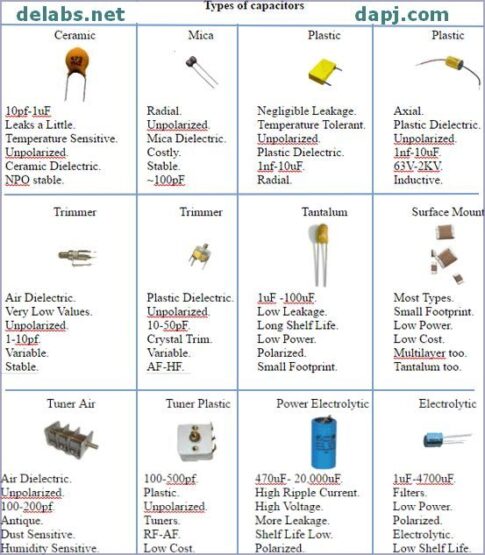